Information on how book came about -

I just received an email from a personal friend of mine who asked me to elaborate more on the book.

Twenty-one years ago, underneath the end table in my parents’ bedroom, I found a very strange hand-made book.

The stained green hard cover has a red cloth emblem on the lower right hand corner.

It is bounded with a simple green string.

I brought the book to my 61 year old mother who was in the hospital. She was dying from bone cancer.

I said "Mom. What's this?" as I handed her the book. She said

"Don't show that to anybody! You'll get killed if anybody reads this book."

My mother told me the story for when she was in the BDM the Bund Deutscher Mädel otherwise known as the "League of German Girls." The BDM was the girl's wing of the overall Nazi party youth movement, the Hitler Youth. It was the only female youth organization in Nazi Germany. The League consisted of two sections: the Jungmädel, or Young Girls League. Membership was made compulsory for eligible girls between 10 and 18 in 1939. My mother told me she was 13 years old when she wrote this book. She also said that is why it is so very important for nobody to ever find out about this book and read it.

That intrigued my interest in wanting to know more about her journal.

Two years after my mother died, I decided to open the book and examine it more closely.

Fraktur was used for printed and written German from the 16th century until 1940. The name Fraktur comes from Latin and means "broken script." It is so called because its ornamental twiddly bits (curlicues) break the continuous line of a word. In German it is usually called the deutsche Schrift (German script).

That started my 20 year on and off and on again quest to research this book.  To this day, I continue to find more information as I start formatting the book into a manuscript.

Twenty years ago, I found an older German Lady in Tampa to translated it into English.  It turns out that she was one of the “Fueher Lehrerins” (Head Teachers) in Germany during this time.

I asked my elderly neighbor, Irma, to read the book and the translation to make sure it matches up. Irma read it 4 times and insisted I get this book published!

This book is seen through a child's eye.  Therefore, this book makes no mention of thecrimes against humanity.

Instead, the book tells a first-hand account of a 10 year old girl, who grew up in Austria prior to WWII.  By the time she was 13 years old, she was chosen to participate in Landjahr.

I am still researching new information for what my mother, Gertrude, wrote about in her journal. I have notes, maps and corresponding emails from professors around the world who have assisted me in even finding the home in which this book was written! I am now typing this book into a manuscript.

This book chronicles my mother’s life during a one year period on a farm now in Poland, previously in Seidorf, and is the ONLY authentic written documentation in history for which I have found that gives insights into the world of the BDM from a child's point of view. These children were innocent; hence the title of this book "Through Innocent Eyes."

This book is the opposite of the Anne Frank Diary.

I have great admiration for Ms. Frank, and her family. With all due respect to the Frank Family, I want people to know that not everyone knew exactly what was going on during World War 2.

I long realize a dream of having my mother's book published.

Eventually, I see it becoming a movie with Lotte Lindl playing on the Zither, the instrument my mother played.
Thank you for reading. 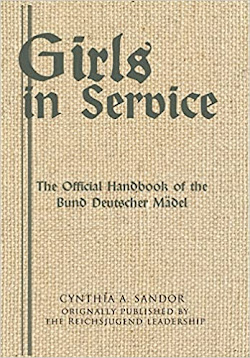