Organization and Structure of the Hitler Youth

Organization and Structure of the Hitler Youth
By Cynthia A. Sandor

The HJ Standort is the highest local authority on all matters concerning the German Youth. It is under the command of the Standortführer (Garrison Commander) and handles all administrative details with regard to the Reichsjugenddienstpflicht (Compulsory National Youth Service).


The Standort maintains the individual youth’s personal records (Jugendstammblatt), which contain all personal data, information on activities, etc. in the greatest of detail.


Extracts of the most essential information are kept on the Karteikarte (Filing Card) held by the member’s unit and on the Dienstkarte (Service Card), which also serves as a personal identity card.


The Standort is not part of the HJ unit structure itself; it only acts as a local administrative authority. Sometimes the Standortführer (SOF) is often also the commander of a Bann.

The RJF controls the policy as well as the administration of the entire HJ. It is headed by the Reichsjugendführer (National Youth Leader) who is assisted by an Adjutant and a Stabsführer (Chief of Staff). The Reichsreferentin controls the HJ, the Bund Deutscher Mädel (BDM – League of German Girls) and the Jungmädel (JM – Young Girls), and is directly responsible to the Reichsjugendführer who is directly responsible to Adolf Hitler.

The HJ inside Greater Germany was organized into 43 Gebiete (Regions). Each Region corresponds to a specific Gau (District). In the Gebiet, there were about 20 Banne (Regiments) and 20 Jungbanne (DJ). In total, there were 223 Banne, totaling 75,000 boys.


Each Gebiet is headed by the Gebietsführer (Regional Leader), whose deputy is his Stabsleiter (Chief of Staff). Each Gebiet has a Gebietsführung (Regional HQ) and is organized into Hauptabteilungen (HA - Executive Sections) and special semi-independent offices. The function of the HA in general correspond to those of the Hauptämter (Departments) of the Reichsjugendführung (RJF), which controlled all administrative and political aspects of the HJ movement.


Each Gebiet administers and maintains schools and camps. Some Gebiete conduct special schools, such as music or medical schools or provide other specialist’s courses.


The Bann (Regiment) is the basic unit of the HJ. In a Gebiet (Region), there are 20 Banne. Each Bann consisted of 4 – 6 Stämme (Units), totaling about 3,000 boys. In 1943, the Jungbann (Young Regiment) of the DJ, parallel to the Bann was abolished and the DJ Jungstämme (Youth Tribes) was placed under the supervision of the HJ Bann.


Generally, each NSDAP-Kreis (Party not Governmental District) contained one corresponding HJ Bann, and its Headquarters are located in the same town as the corresponding NSDAP-Kreis HQ. Larger Banne sometimes organized their own schools and courses and some even operated youth hostels and homes as well as camping sites.


The Bann is led by the Bannführer (Regiment Leader) who frequently held the office of the Standortführer (Garrison Commander). He is assisted by the Adjutant and a Hauptstammführer.


The Bann administration is divided into 6 Hauptstellen (Executive Offices) the functions of which generally correspond to the 6 Hauptämter (Departments) of the RJF and the 6 parallel Hauptabteilungen (Executive Sections) of the Gebietsführung (Regional Command HQs).


Special Units of the Bann - Each Bann had some special service units, usually:


These special service Stämme (tribes) are sub-divided in accordance with the established pattern of Gefolgschaft (Company), Schar (Platoon), and Kamaradschaft (Comradeship) as outlined below in the Organization of the Regiment Level of the HJ.


Among the smaller special service units found in the average Stämm (tribe) are:


Organization below the Regimental Level


From the Stämm downward the unit of organization is standardized. A Stämm is divided into 3 - 5 Gefolgschaften (Companies) 150 each. In the DJ, there were 3 – 5 Fähnlein (Squadron) with approximately 160 cubs each. Totaling 600 – 800 boys. (Later became known as an Unterbann).


The Gefolgschaft is organized up to 4 Scharen (Platoons) of 50 each, totaling up to 190 boys. In the DJ, the Gefolgschaft is equivalent to the Fähnlein (squadron) and contains 4 - Jungzüge units. Each Gefolgschaft, roughly the size of a military company, had its own flag, and was the primary unit. HJ boys identified themselves with this unit.


Each Schar was sub-divided into 4 Kameradschaften (Comradeship) of 15 each and the latter split into two Rotten (Files). Total 60 boys. In the DJ, the Schar is equivalent to the Jungzüge and contained 4 Jugenschaften. A total unit of one Platoon was as many as 60 boys.


HJ Kameradschaft - HJ Comradeship - was the smallest unit with 10 – 15 boys and was overseen by the Kammeradschaftsfüfrer in the HJ and in the DJ by the Jungenschaftsführer.


HJ Rotte - HJ File – consisted of about 7 boys (mostly left out of organizational charts of the HJ).

For information on the Oberbann, please visit HJ and DJ Cloth Insignia Collection

The Untergau and Obergau of the "BDM" became obsolete.
The Obergau was abolished and the Untergau changed to BDM Bann.

For additional information on the League of German girls, please visit:
BDM History 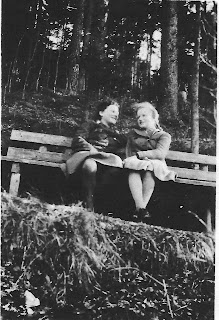 Photo on cover of "Through Innocent Eyes - The Chosen Girls of the Hitler Youth
© 2012 Cynthia A. Sandor


No un-authorized reproduction is allowed without the express written consent of the author.

Posted by Cynthia A. Sandor at 8:40 PM No comments: