Why did these Jungmädels wear white on this day in 1935? 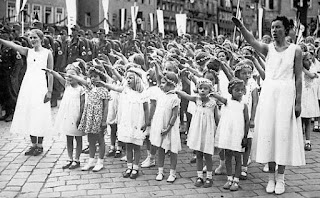 It is unbelievable how much controversy is surrounding this photo taken in 1935 in Coburg, Germany during the 75th anniversary of the foundation of the German Gymnastic Association.

On February 5, 2019, a Facebook user name Anna Love, shared this same photo on her website. She claimed that "the photograph show Nazi Socialist women wearing their customary white attire. They always went to public events wearing white." An identical post appeared on her Twitter account.

Some people are associating this photo of a group of 7 - 9 year old girls wearing white were part of the Lebensborn children.

They are also associating this photo with Nancy Pelosi and the Democratic women of Congress wearing white to President Trump's State of the Union Speech in February 2020. The women were wearing white "as a way to show their unity and a commitment to defending the rights of women and disenfranchised groups at the 2020 State of the Union address. The decision to wear white is an homage to the white outfits often worn by suffragists during their fight to get women’s votes recognized. (To read the entire article: Time Article)

The truth behind this photo is this:

On April 3, 1935, a short article appeared in the The Straits Times that read:


"10,000 gymnasts, men and women, from all over Germany are to take part at the Whitsuntide in the national memorial demonstration at Coburg to celebrate the 75th Anniversary of the foundation of  the German Gymnastic Association." 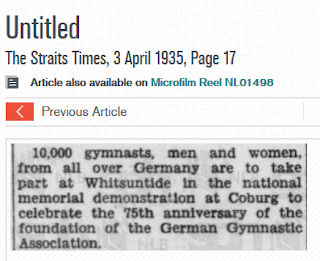 At this point, you might be asking yourself "What is a Whitsuntide?"  Good question. I'll tell you what it is in a moment. But, before I do, here's a little background information first.
The German Gymnastic Association was known as the Deutscher Turnerschaft. Under the leadership and influence of Edmund Neuendorff, the Turnerschaft was completely absorbed into the National Socialist movement, losing its independence. It was done in a sense of duty to National Socialism at the Coburg Day of German Gymnastics in 1935. The German Gymnastic Association now became part of the National League for Physical Exercise, a centrally directed National Socialism sport association. (Source: Ueberhorst, Horst. Friedrich Ludwig Jahn - 1778/1978. Munich: Heinz Moos Verlag, 1978).

Through Neuendorff's proclamations, the National Socialistic ideology used Friedrich Jahn's physical education program, which had renewed the spirit of German national defense and liberation against Napoleon. Neuendorff stressed that German gymnasts must be proud Germans, upholding the character of their largely Nordic blood, must uphold and defend their German freedom and self-reliance, and must regain what has been lost since 1918.  (Source: Ueberhorst, John, pg. 77). (1)


"When, therefore, the Deutsche Turnerschaft celebrated the 75th anniversary of its foundation at Coburg (Whitsun 1935), I was in a position to give expression to the thoughts which all sportsmen, owing to their National Socialist views, expected to result in their own sphere of activities from the fundamental transformation in all domains of public life. It will always redound to the credit of the executive of the Deutsche Turnerschaft that they voluntarily resolved upon the dissolution of their great organisation and that they enabled their large number of members to join the Reich Federation for Physical Exercises in a body." p. 106 (2)

There's that word again "Whitsun."  So, what does the word Whitsun or Whitsuntide really mean?

It is the reason why these Jungmädels wore white on this 9th day in June 1935.

What is Pentecost?  Pentecost is:

1. The  Christian festival celebrating the descent of the Holy Spirit on the disciples of Jesus after his Ascension, held on the seventh Sunday after Easter - the day on which Pentecost is held.

2.  The Jewish Festival of Shavuouth.

The photo above is not associated with the Lebensborn program or Nancy Pelosi and the suffragette movement.

No. The young girls in the BDM did not wear white to their meetings. They had a uniform. Please see BDM History for a complete description of their uniforms.

Besides, the color white in the BDM was associated with purity and innocence.

And, if you are questioning the dates from the newspaper clipping to the actual date of the anniversary, please read the newspaper article again. It says "are to take part at the....."

"10,000 gymnasts, men and women, from all over Germany are to take part at the Whitsuntide in the national memorial demonstration at Coburg to celebrate the 75th Anniversary of the foundation of  the German Gymnastic Association."

(1) To The Berlin Games: The Olympic Movement in German From 1896 - 1936. Thesis Presented to the Graduate Council of the North Texas State University in Partial Fulfillment of the Requirement for the Degree of Master of Science by William Gerard Durick, B.S. Denton, Texas, May 1984.
Link: Durick Thesis.