This FREE event is to commemorate the D-Day landings by U.S. troops on the beaches of Normandy, France on June 6, 1944, which marked the beginning of the end to Hitler’s “Fortress Europe” during World War II.

This year is the 76th anniversary of the D-Day invasions.

·        Reenactors will be on hand in their period uniforms wearing the equipment and weapons they carried by the troops to illustrate what the soldiers, on both sides, both Allied & Axis, would have looked like.

Reflections is the intimate memoir of English born Dorothy Swanson, wife to paratrooper Norman, from the 82nd Airborne Division, 327th Glider Infantry Regiment, and a mother of nine.

She shares the most exciting, emotional, amusing, embarrassing, horrifying, and interesting moments from her life as a military wife, traveling from country-to-country, base-to-base with her husband Norman, to studying to become an operating room nurse, and to caring for one of the world's most beloved comatose patients, Terri Schiavo.

“Dorothy gives us light and hope having lived through the horrors of WWII as a child and a meandering life as a military wife. Reflections is a gripping read; you will fall in love with Dorothy’s courage, perseverance, and joy for living. A book to enlighten and encourage us all.”

“With frankness tempered by sensitivity, Cynthia A. Sandor renders the true story of a woman’s untiring faithfulness in her intrinsic worthiness and her heroic striving toward personal actualization.”

“Dorothy Swanson and I have quite a lot in common. Although I did not arrive in England until 1948, from a DP Camp, with other Estonian WWII refugees, my experiences in post-war England were tumultuous. Like Dorothy, I ran the gamut of being ‘filthy foreign goods' in an orphanage and a textile weaver at fifteen until I got a scholarship to a London drama school and became an actress and writer for the BBC. I am now an international author. Like Dorothy, every step forward was a milestone achievement. I recommend Dorothy’s book to everyone who understands that a hard climb uphill is exhausting but the view from the top usually worth the struggle. Definitely an inspiring book!”

~ Elin Toona Gottschalk, English, Estonian and American Author - “Into Exile: A Life Story of War and Peace”; nominated Best Memoir of 2013 by The Economist Magazine, and nine other book awards ~

"The voice of women in the realms of military literature has been largely silent over the decades following the end of the Second World War in 1945.  Through her remarkable life, Dorothy endured privations most men would have found unbearable.

Dorothy's memoir has been vividly yet skillfully brought to life by Cynthia A. Sandor in what is a journey of happiness, pain, sadness, extreme hardship, and pure determination often against seemingly impossible odds. Reflections presents to its reader not only an important literary work from the perspective of the struggles many women have had to face throughout the last century but also a bare-knuckle brawl of female social history which makes for both powerful and emotional reading.

To purchase an autograph copy click here:  Reflections - The Story of Dorothy Swanson 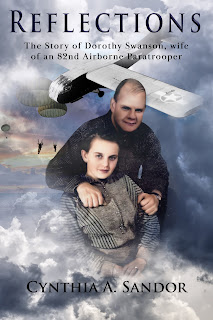